Dr Jagraj Singh was born in village Mari Megha Tehsil Kasur, District Lahore (now Tehsil Patti, District Tarn Taran) in the Sikh heartland called ‘Majha’ (central Punjab), the land of early Sikh veterans. He passed his matriculation examination from Majha Khalsa High School Khalra and F.Sc. medical from Khalsa college Amritsar, where Dr Taaran was his professor of divinity. He was trained as an allopath at Arya Medical School Ludhiana and passed his LSMF examination in 1963. Thereafter he had a short stint with government service in the Punjab but soon he resigned from his government job and started his private practice at the historic town of Sri Hargobindpur in Gurdaspur district. Before his migration to USA in 1998, he practiced there for about thirty five years. During all these years of his life he witnessed the partition of the Sikh homeland in 1947, the Punjabi Suba agitation by the Sikhs and the re-organization of the Punjab, the emergency of Indo-China war, emergency imposed by Mrs. Indra Gandhi, two Indo-Pak wars, operation Blue Star, operation Black Thunder and the aftermath. He had the good luck of coming into personal contact with almost all important Sikh political and religious leaders of afore said period.

All Sikh Gurus or their parents were born within a radius of about fifty miles around Lahore. The Moghul, Muslim governments of the Punjab and Hindustan were forced by the Sikhs through armed struggle to accept their suzrenity over the Parganas of Jhabal, Patti, Dipalpur, Kanaganwal and Chunian areas along the north-west bank of Beas and Satlej rivers. These areas were granted to the Sikhs as Jagir (estate) with Amritsar as their headquarter in the province of Lahore in the Punjab in 1733 A.D, by the Moghul Muslim government and their leader Kapur Singh was given the title of Nawab. Eleven Misals out of the total twelve Sikh Misals who successfully destroyed the Muslim domination and rule in the Punjab and established Sikh rule in their homeland (Punjab) belonged to this area.

A Complete Guide to Sikhism

A Comparative Study of Sikhism and Hinduism

Punjabi language and it's Gurmukhi script

Activities and societies: Research on Sikh religion and Sikh history. Published author of:

There is one God.
He is infinite. He is eternal reality. He is Enlightener and Gracious. 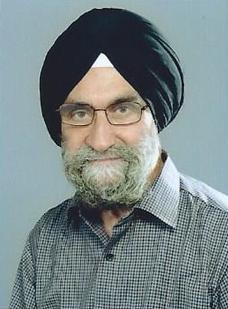